Home For Thanksgiving...And it's alright. Really. 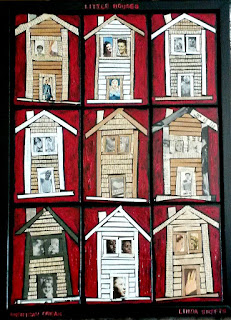 For the past ten years or so I've not really had a Thanksgiving (or even Xmas)holiday (read, rest) vacation...I've had to drive here or there to set up and sell my artworks. Blue Genie and Eye of the Dog in Austin and San Marcos, Texas and the past couple of years, the Little Craft Show here in NW Arkansas. This year, due to many reasons; I'm still here in NW Arky.  I didn't get picked for the Little Craft Show, haven't done Blue Genie in a few years because I moved, and my cat got sick, my back is bad and I'm exhausted from my work schedule.  But mostly the cat getting sick threw me over the edge, so I cancelled my annual trip to Austin where I usually have turkey with friends and then spend the weekend in San Marcos, selling and hanging out.  At first the possibility of not going was so strange and foreign I didn't even want to consider it. My younger self would've said, "Oh what the hell, just go and get through it!" Now that I'm somewhat older and maybe just a little bit wiser I thought, "Well, what's the worst thing that could happen if I don't go?" And that's when I realized that while I will and do miss my friends/family there, I'll live, they'll live and I can drive down another time, when I can really spend a good focused visit. It's nice to be relaxing, eating, working on a bazillion pet portrait commissions that need to be done before xmas. It's a good life. I do have some small scratchboard trinkets and art pieces at the Walton Arts Center gallery here in Fayetteville during the holiday season. The gallery is open one hour before events/shows until December 23rd. There are 20+ other artists there with pottery, paintings, jewelry etc... It's a good show, and the best part about it is they do all the selling and smoozing. There is an artist reception this Saturday from 2-5pm. I will clean up and go mingle.  I also have many little pieces of art that were destined to go to Texas to sell...contact me to see/buy them. That's it. The above piece of art is a mixed-media piece from my "Little Houses" series. Happy Thanksgiving! I hope my cat gets better soon. I hope y'all had plenty to eat and good times wherever you spend your turkey day.
Posted by Unknown at 11/26/2015 No comments:

All Is Good--All Is Fine 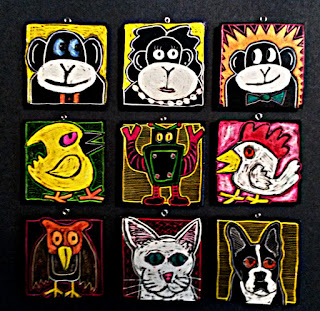 The above are some earlier examples of my "Little Originals". They are 2x2 inch scratchboards colored with Ampersand Scratchboard inks. These are from maybe two years ago. 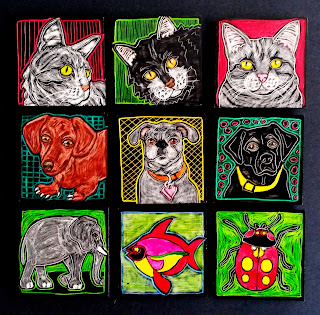 These "Little Originals", on the other hand are from this past spring. I love making the "littles", they are challenging detail wise and just darned good fun for me.
I'm working on several pet portrait commissions, along with creating a heap of the little original scratchboards for a few holiday shows.  It's all good here. I'm fine.
I've spent the past four or five years sorting and cataloging the archives of my favorite poet and there is still so much to do. I'm happy with that for now. It's incredibly interesting and helps me to feel even closer to him though he's been dead now for nine months. I suppose I will be extremely sad when I'm finished, it will be another kind of letting go. And damn, I've been learning to let go for sure.
I'm terribly busy...what with the art-making, archive sorting, and oh yeah, caretaker of a almost 98 year old man (that's a whole different storyline for another time). What curious twists and turns my life has taken, from artist to plumber, back to artist, to archivist, to healthcare. I'm usually juggling all of them, well, not so much the plumber anymore, as it's too hard on me physically. And that's just fine with me.
Today I travel to Boston for a week with friends. My first time off in quite a while. Excited. Happy.
Sorry for the somewhat blurry photos. I prefer that to finding them duplicated without my permission...and I really hate the 'hallmark' thing that some artists put on their images to try to prevent copyright infringement. Just don't use something that doesn't belong to you. Simple as that. Got it? Thanks.
Posted by Unknown at 9/22/2015 No comments:

Goals Set and Met. Now What? 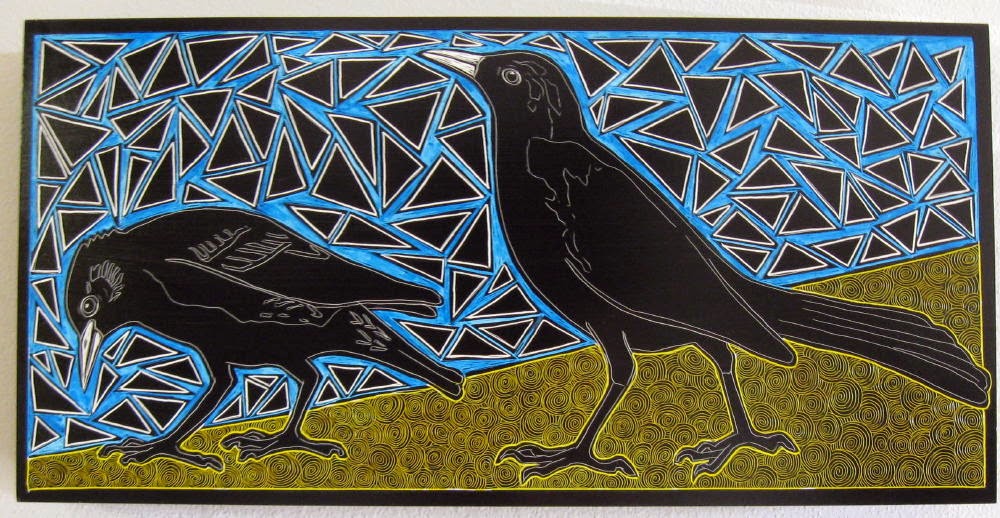 Two For The Road

It's already been quite an eventful year in Linda-Land just four months in. Chock-a-block full of ups, downs, and ins and outs. I just reached my 60th year with mixed feelings so I thought a look back might help me make a little sense of it all.
I'd set a few goals for myself in 2014, one being that I didn't want to enter my 60's overweight so I set about to loosing around forty pounds, and fortunately did it. Everything feels better now, although I'd like to have ten more pounds gone by mid-summer. Small goal, but a goal nonetheless.
Another goal, and you might think me silly for having this, was, along with the weight loss I wanted to be able to fit into a pair of jeans that had belonged to my dad, by the anniversary of his death on Jan. 26th. Eleven years ago I was back in Indiana helping to care for him when he was dying. I hadn't packed many clothes because I wasn't sure how long I would be there. I flew in Xmas eve,stayed until the first week in Feb. and had gotten really tired of wearing the same things everyday, so dad offered a pair of his pants to me. They fit and I got a little change of wardrobe to take my mind off of the saddness. After he died I took them with me and put them away. Due to some side affects from the anti-depressants I took after returning home from this life changing event, I put on some weight...and then ballooned up to a really health damaging weight.
Two somewhat related goals were set and then met. As I said in the title, now what?
A dear friend fell down the stairs and broke her ankle badly Dec. 28th and then four days later on Jan. 1, her husband, another dear friend of mine, died. I've been renting a living/studio space from them since May; after knowing them several years and working on two art books with him, it made perfect sense to me to do my best to help her recover, not only from the physical injury, but from the emotional loss. Doing this has also helped me to deal with my own grief. I've stayed busy enough to stay a few steps ahead of it.
Just recently I got back to making some artwork...little scratchboards, mostly rv's or trailers to satisfy my desire to someday own one and hit the road like a nomad. I'm also revisiting the mixed-media 'little house' series. There are a few examples shown here. I hope to sell a lot of them at the spring version of The Little Craft Show here in Northwest Arkansas. It's May 30, downtown Springdale. One day only. I'll add more information later as the date comes closer. It promises to be a great sale. 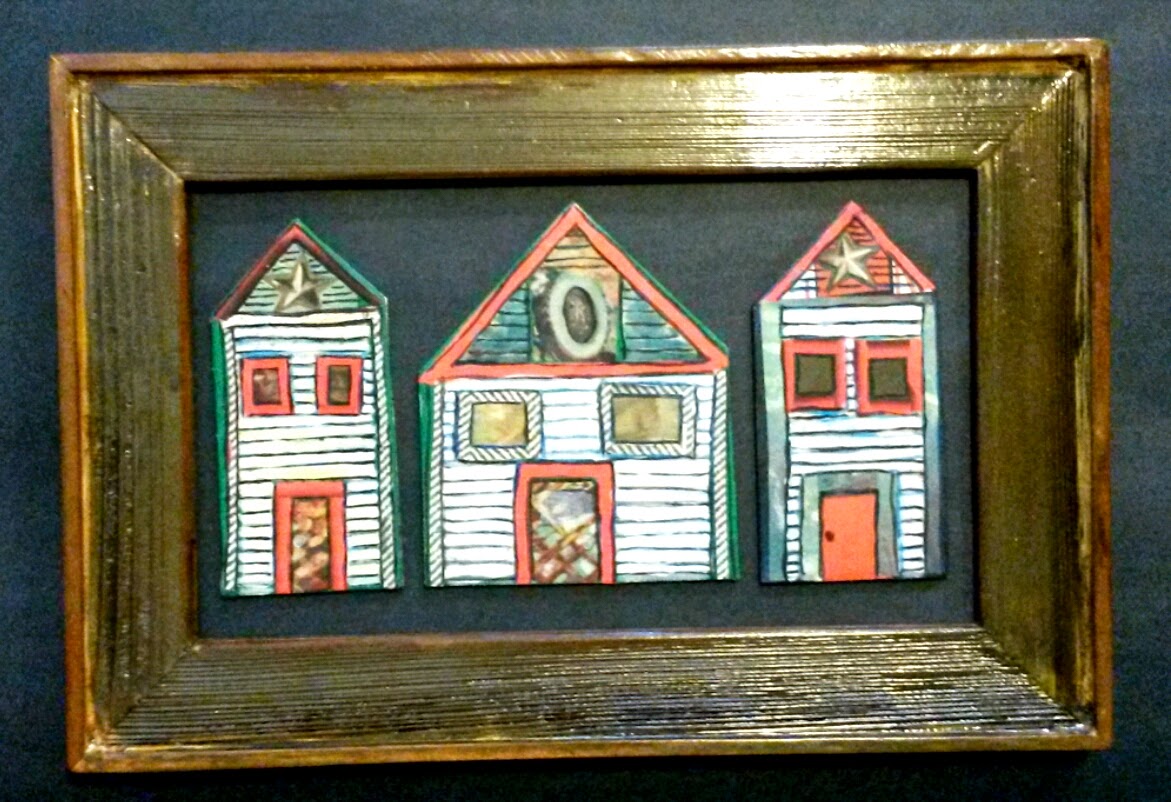 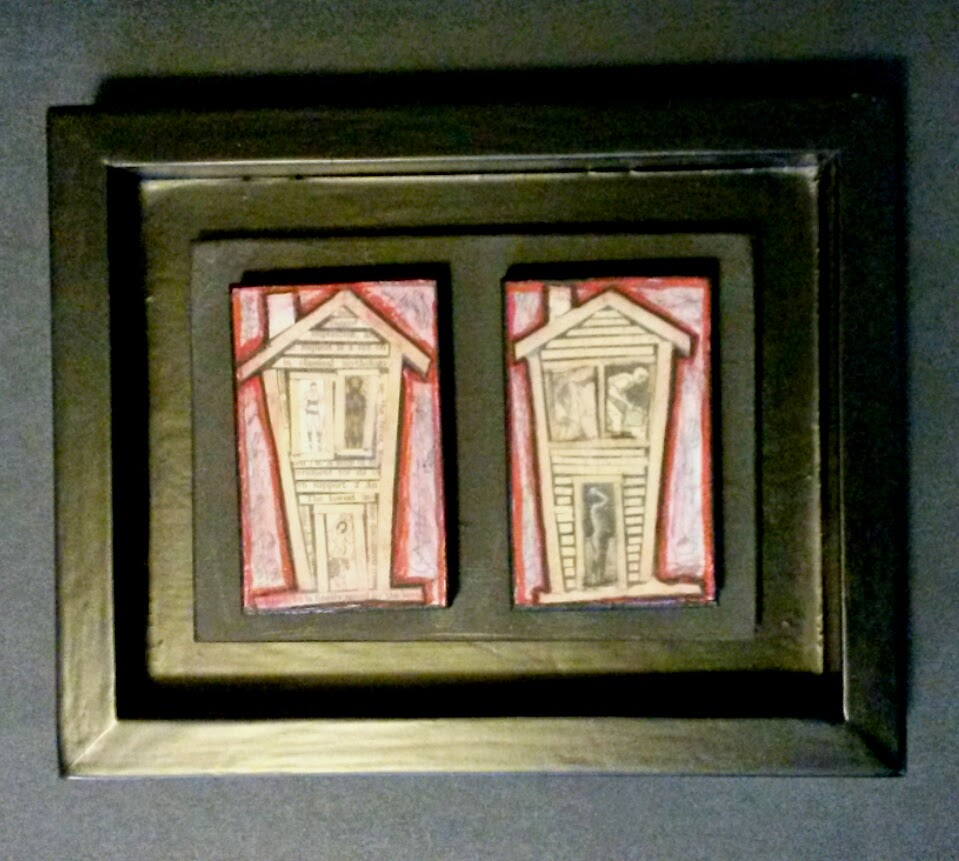 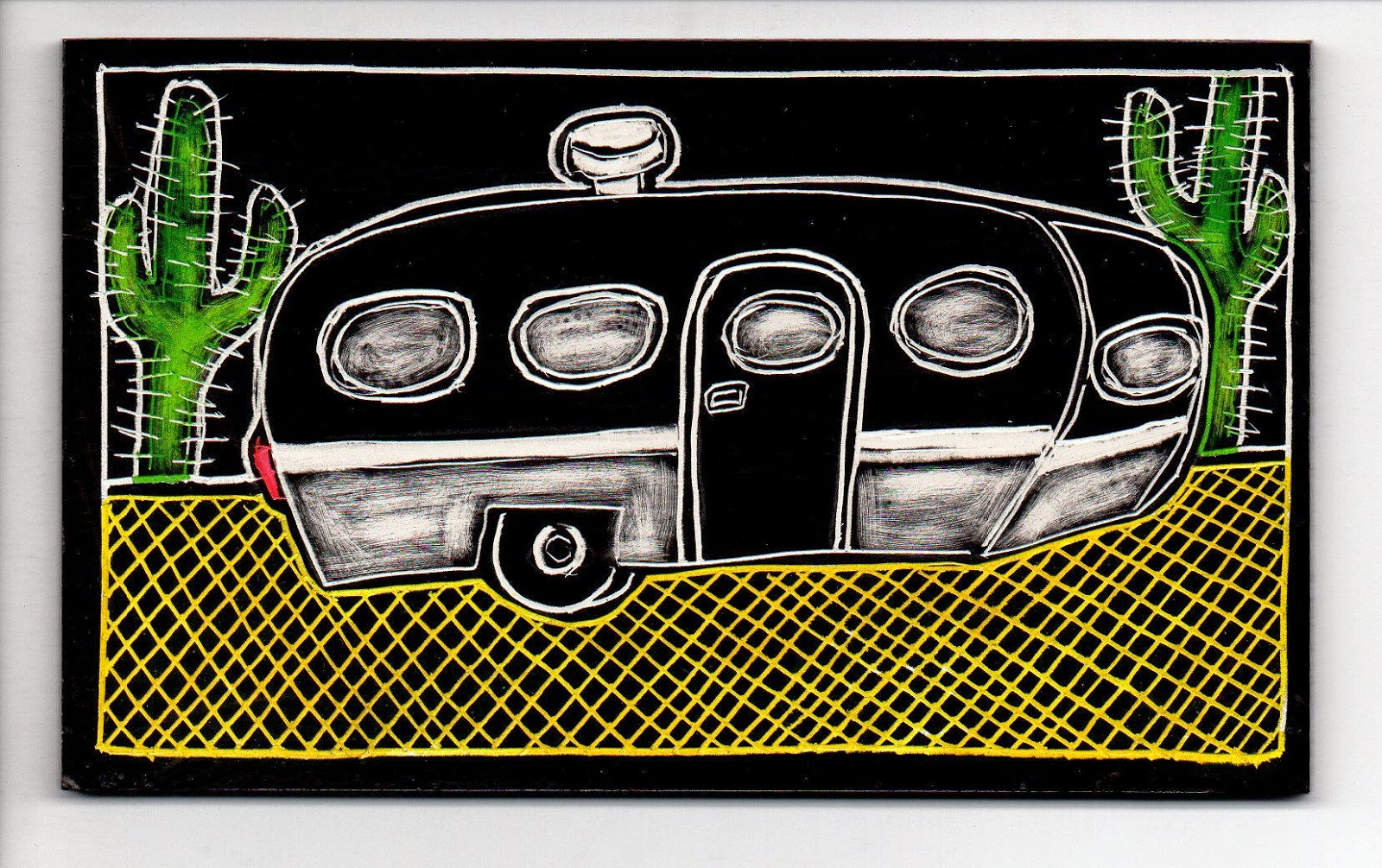 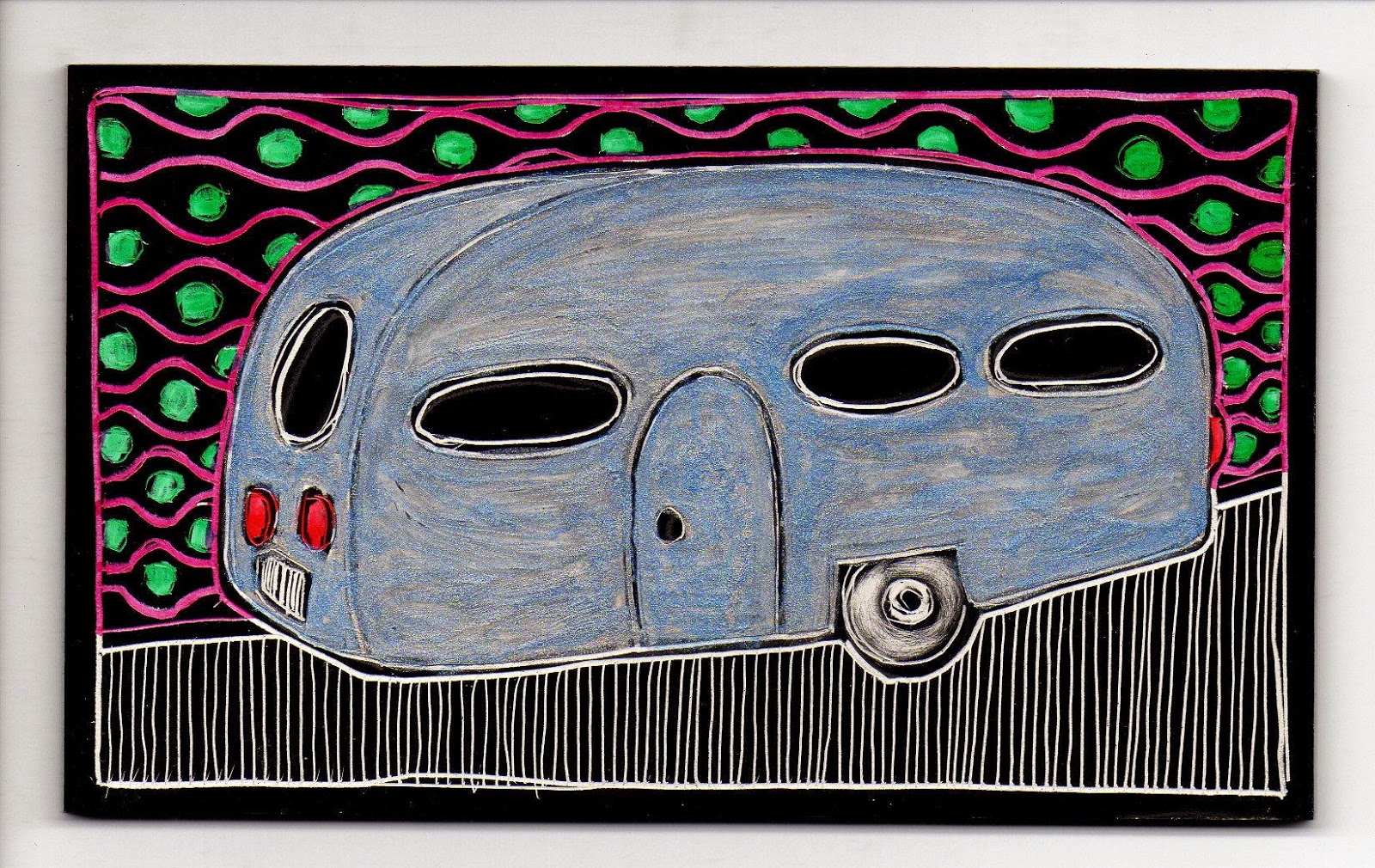 Oh yeah, I also got a new car. After almost forty years of owning trucks of one kind or another...I got a little suv. You might say, "what got into you?" Oh hell, who knows? It was a reality check of sorts, I had an older truck with 218,000 miles on it and plenty of expensive future repairs just waiting to happen. The money I'd been saving for an RV was there and willing to be spent. My days of hauling tools and lumber around are pretty much over, so a truck is less important to me than it once was.
So, here I am. Wanting to get through the memorial service for my friend on the 26th, really hoping that all will begin to heal. There's a goal worth having, mentioning, and reaching.
What's next? Art, of course, always. And staying right where I am for a bit until I figure it all out. Keeping the weight off, would be good, of course. Mostly I do a little work and thinking about all of this everyday, so I figure I'll come up with something. If not, at least I've been working and thinking.

One more thing; I need to get some commission work going and so I'm officially declaring April half-off month for pet and people portraits. If you've ever wanted one of my scratchboard interpretations of your pets or people, now's the time to jump in and book them. Normally a 5"x 7" framed scratchboard is $150.00. All of April they are $75.00, including shipping unless you're out of the US and then the shipping is extra. So give me a holler and I'll get started on your custom drawing.
Posted by Unknown at 4/02/2015 2 comments:

Some Things To Look At...And Think About. 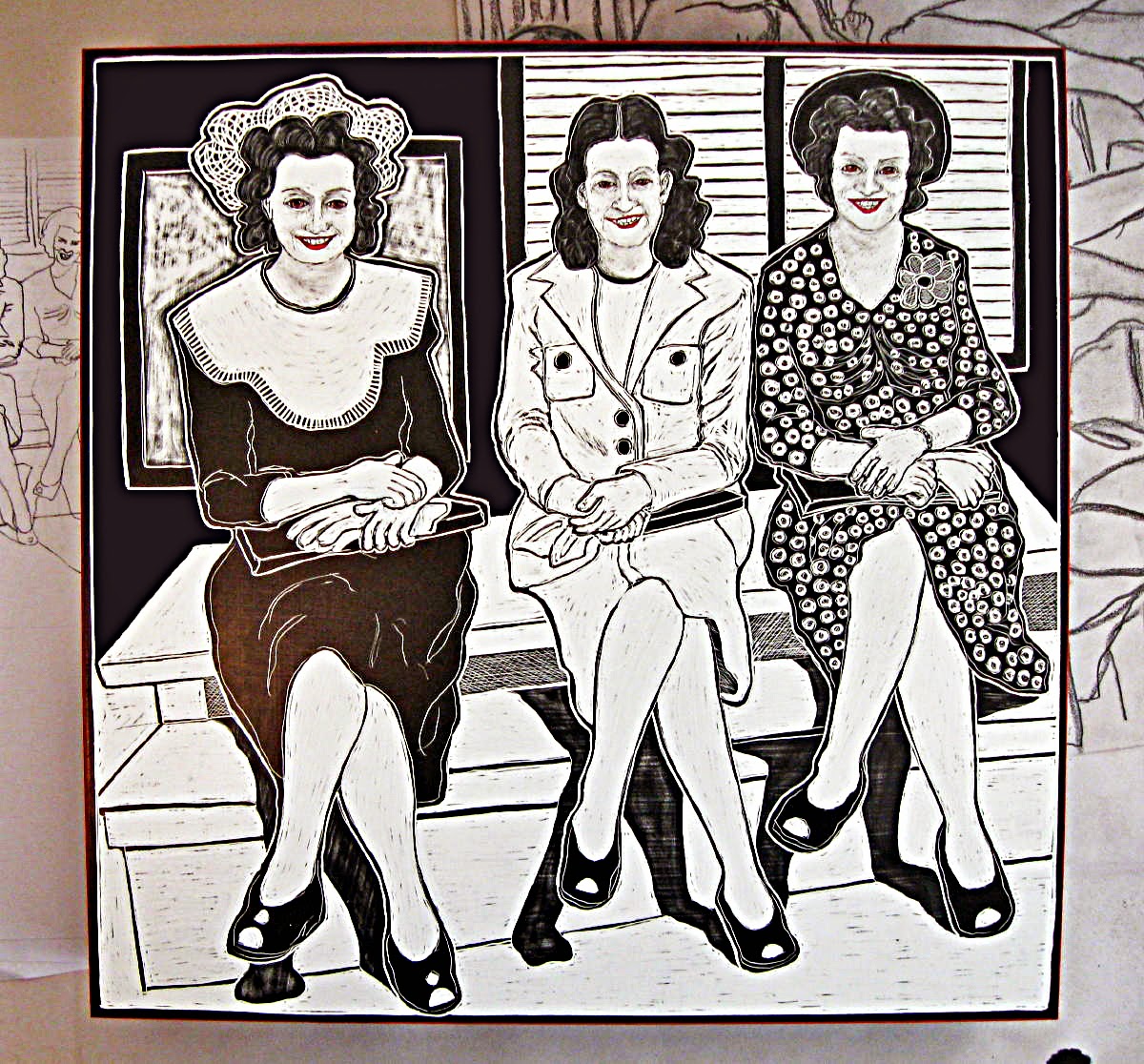 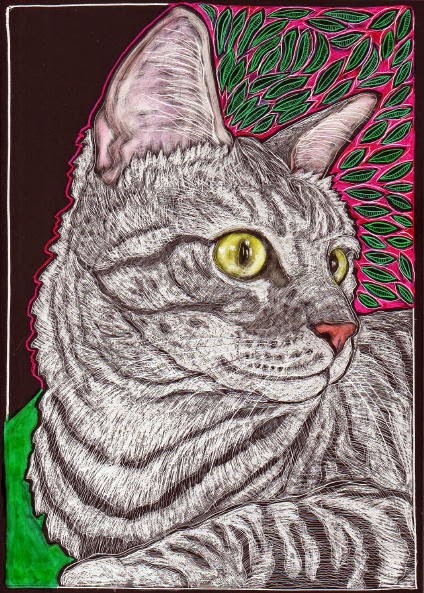 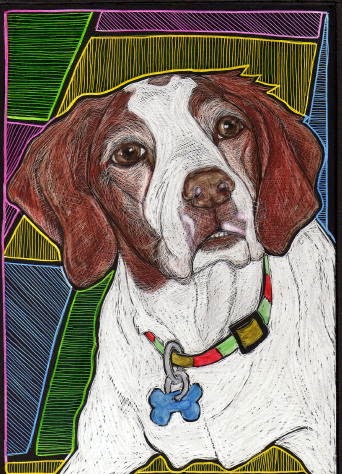 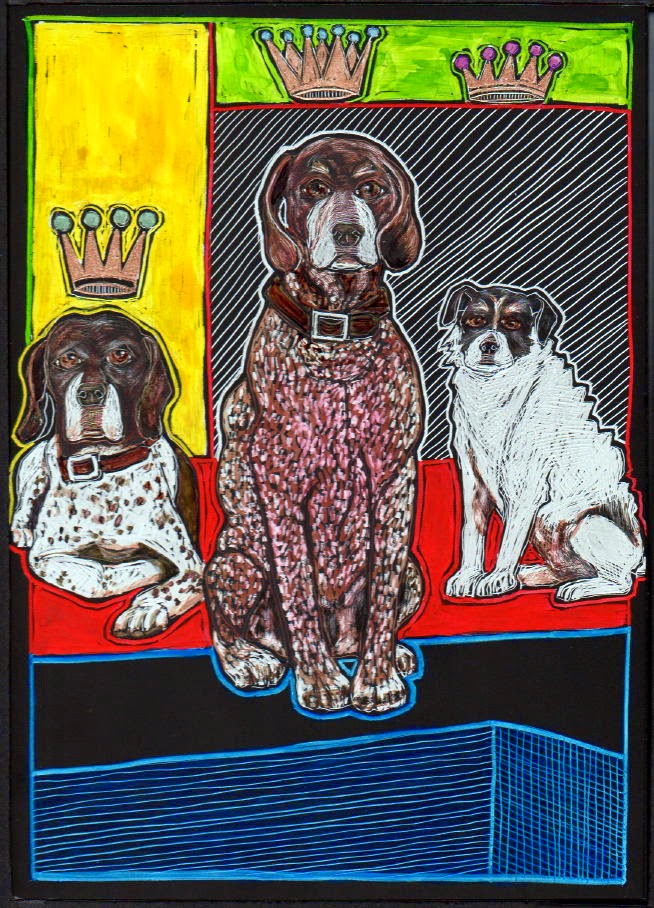 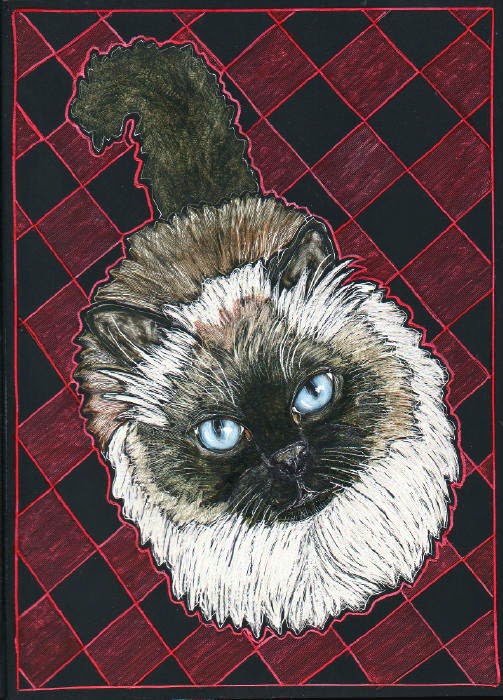 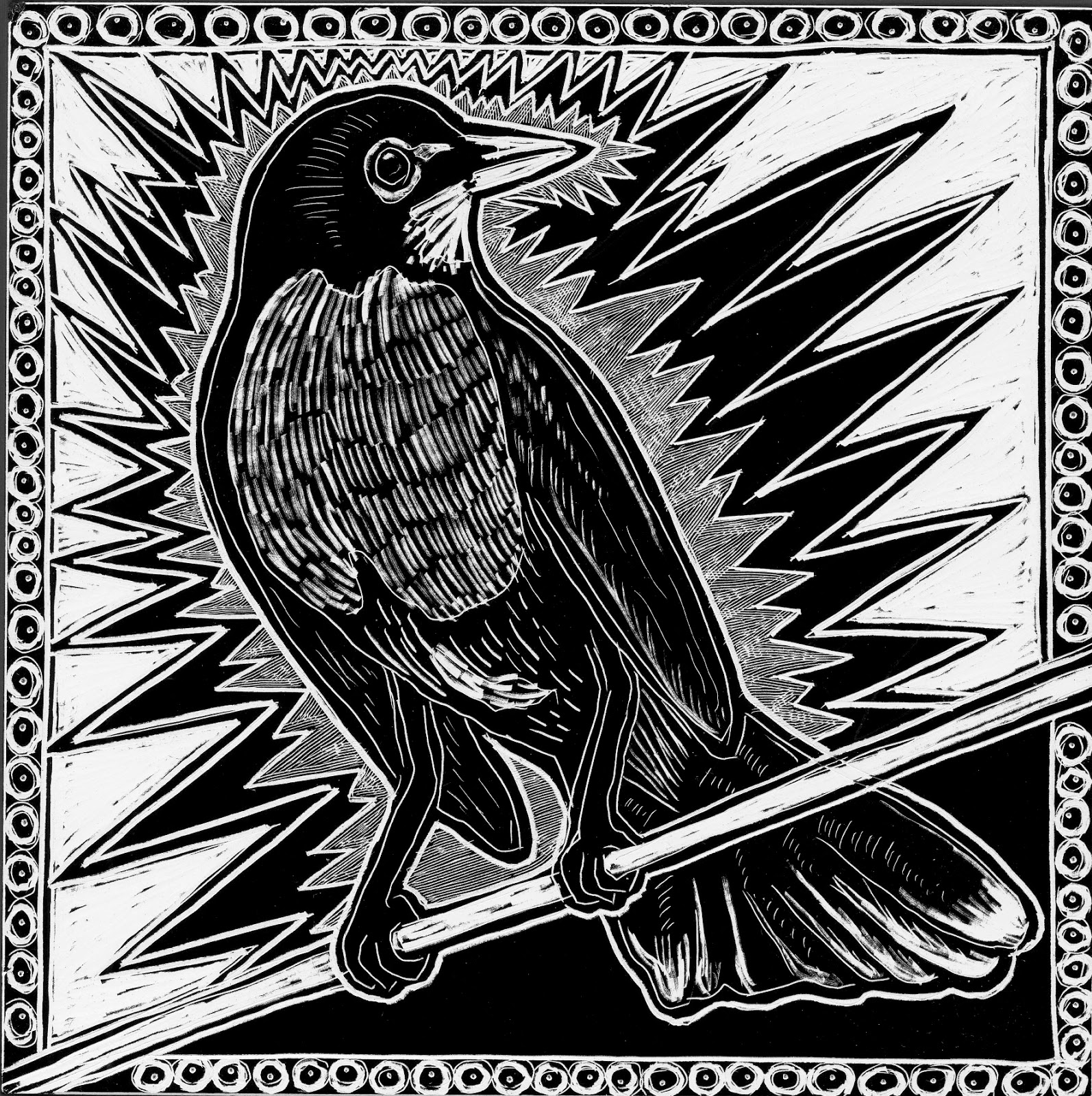 The above are just a few of the scratchboard artworks I made in the latter part of 2014. People, Dogs, Cats, Birds, what's next, you might ask. Honestly, I don't know. A dear friend died January 1st and I've been dealing with the emotional aftermath of that, plus helping his widow (who I rent a space from) recover from a badly broken ankle. (she fell down the stairs, broke it four days before he died) It's has been so difficult, but I'm glad I was here to help.
Another kind of difficult event I had to deal with in November was being dropped from the big gallery that I had been with for ten years. That one stung. But, shit happens, people change and so I'm rolling with it. My Linda Sheets Art etsy shop is closed for now as well, at least until I can figure this all out.
The only place to find my art on the wall right now is in Johnson City, Texas at Taste, Wine and Art Gallery. And directly from me of course. I'm looking for commission work for 2015. Give me a hollar and I'll send a price list and get started on your piece.
Meanwhile, I snatch moments here and there, starting and stopping pieces that appeal to me. Nothing completed so far in 2015. I'm not afraid that I'll 'lose' my momentum or stop making art, I've realized that I'm doing what's most important right now...the art is just in my head rather than on the drawing table. Check back with me later to see what pops out.
And then there's this:
Google has sent me an email saying that my blog may be 'privatized' or hidden because of 'adult content'.  I guess it's because of the nude women drawings on earlier posts? Really?  It's ART, mofo's. Jesus H. Christ.(and I say that with my 'adult' agnostic voice)  I'm just about to unleash a string of 'Adult' words...I'll try and restrain myself.  In this time period of 50 Shades of Grey, (which I didn't read because it's so fucking poorly written, not because of any prudishness on my part, because, believe me, I've danced in many of the grey shades) And, oh yeah, I have no desire to see the stupid movie that lonely housewives in overtly religious states like Arkansas and Mississippi are flocking to. Go figure that fact.
So are you saying that crap like that soft porn is ok by you, but nudity in artwork is not? I'm just trying to figure out the guidelines here.
I'm going to quit now while my head is still attached to my body (my blood pressure is high as hell from all of this government and authorities 'trying to regulate morality')and hope that a few of you are sticking around to see what's next from 'Linda-Land'.
Posted by Unknown at 2/25/2015 1 comment: