The Artists Of The Fayetteville Underground Are NOT Folding!

Please go here to see how to help. http://www.morphtheorg.com/
I was reminded last night, at a really sweet party held for the Fayetteville Underground artists, what a great bunch of folks I get to work with.  Today there was a misleading article in the North West Arkansas Times saying that we are folding...Correction:  The board of this organization, who are unable to raise enough funds to fight their way out of a paper bag, are dissolving the organization at the end of the year.  In spite of our best efforts to take over the organization and thus preserving our momentum and enabling us to receive possible funding from the Warhol Foundation grant that we applied for, they decided on a "Clean Break".
Just so you know, There are two more 1st Thursday events (November and December) and shows at the current location until the very last day of December.  AND THEN:  a metamorphosis, or evolution (maybe even a REVOLUTION!)  The artists, who worked very hard to keep things humming at the galleries all along, are going to create something even better than before.  Stay with us, follow us, help us keep the creative economy going in North West Arkansas,  We Need All Y'all To Step Up And Help!
Posted by Unknown at 10/29/2011 1 comment:

Everybody Loves A Starving Artist 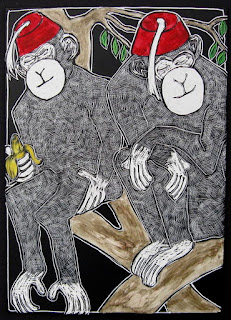 ...But nobody wants to feed them.  I've been thinking about what an friend said the other day.  Someone in a powerful position had said to her that "she was a 'different' kind of artist because she used both sides of her brain, rather than just the right side". I was amused, stunned, a bit confused and a little angry.  I don't even really know what she meant by that statement.  I'm quite sure it was based on ignorance and long held stereotypes of what artists are and are not.  Thinking back to my art school days,  I too had some pretty common myths about what artists should be doing.  Suffering was right up there at the top of the list, along with starving, being a drunken fool, etc...  Trust me,  I tried them all.  None of those things made me a better artist.  In fact, for the most part the works I made while drinking or suffering were absolute crap.  I dropped out of art school after two years to become a plumber.  It seemed like a good move at the time.  Especially since I did not want to become a teacher (surprise, I now LOVE teaching) or a graphic artist (which to me, somehow was 'less' of an artist). I think differently now.
So, a plumber and contractor I became.  And I did it for about 25 years solid, with very little art mixed in with it.  It was good, and then art called me back and I answered the call.
I'm not quite sure which side of my brain I used while having my own contracting business.  Left, right, both sides, what does it matter?  What is important is that I was able to 'stick with it'.  Putting my head down and just getting the job done.  Good lessons that I've been able to apply to my current art career.  And listen, those of you who refuse to be thinking creatively?  Please, step aside and let me move forward.  Artists HAVE REAL JOBS. Really.  In fact,  sometimes I think my job is harder because I have to make something up that didn't exist every single time I start a new artwork. The above is an example of that.  I worked on this yesterday because I'm trying to fulfill a themed group show at a gallery.  "After Dark" is the theme.  This is "2 Monkey Night".  It's an Ampersand Art scratchbord.  I hope the gallery likes it and I can sell it.  That's my reality.  Not only do I have to make stuff up and execute it well, I have to market it and hope someone likes it enough to buy it.  All in a days work for an artist.
Now granted, there are many artists who do fill those stereotypes quite well.  But, there are also a lot of plumbers, lawyers, doctors and every other profession who fit it too. So please, understand when I roll my eyes, or appear less than appreciative of your assessment of my chosen vocation.  You just have no idea.
Posted by Unknown at 10/28/2011 No comments: 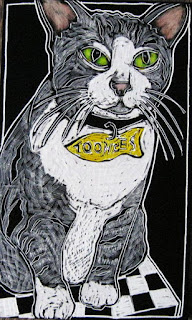 Finished this little guy and sent if off.  It was a commission for a friend in Austin who is giving it to her father this month for his birthday.  Toonces was his favorite cat and, if I have the story right, died sometime in the past year.  I'm always happy to take on a commission, especially if the dog/cat was/is a beloved family pet.  It is a small 3"x5" Ampersand Art Supply scratchbord unframed.  I used a bit of ink for the eyes, ears, and tag. While doing it I kept humming, 'Toonces, the driving cat.' Old Saturday Night Live skit...In the old, old days folks!
Tomorrow I will be giving 4 scratchbord workshops for the VA at the Fayetteville Underground.  Total of about 100 folks. What fun!  I love teaching scratchbord...hope to be doing quite a bit of it this coming year.  Stay tuned.  And let me know if you need/want a scratchboard done of your pet.
Posted by Unknown at 10/17/2011 No comments:

YES!  I'd even venture to say, 'HELL YES'!  Am I an angry person?  No, in fact I am one of the happiest people around.  I have great friends and a pretty wonderful life.
Here are a few of the things that make me angry.  And, because I have paid for enough therapy over the years to buy a house,  I'm pretty sure there is nothing wrong with being angry about certain things.  In fact, people who 'never' get angry frighten me because I think there must be a shit-load of stuff a'brewing inside of them waiting to explode on someone who doesn't deserve it.
So, to continue, here are a few things that make me really angry;
Bad, rude, dismissive behavior.  Men who think it's ok to treat women badly.  Women who think it's ok to treat men badly.  Mean, ignorant people. Unfair situations. Trying to control me, my behavior or actions (or others) because you are weak or fearful.(or just plain controlling for whatever reason)  BULLIES, physical or emotional. People who think they know me, but have never had a conversation with me who say that I'm angry.
These are just a few of my angry things.  Thanks, I just had to get that off my chest.
Now, here are some happy things to take your mind off of what an angry woman I am. 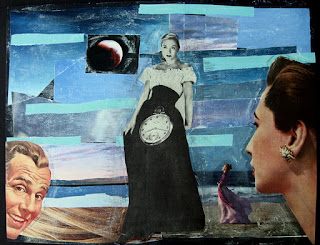 This is a new collage piece I finished recently.  Since there has been some crazy high drama at the art organization/studio I've been working happily at home on many, many new works.  I'm not going to beat around the bush,  The Fayetteville Underground has become a toxic place for me.  I have loved being there,  but now, not so much.
So for your consideration..."Looking For Dali"  I have to update the photo, I've actually added some color to the clock in the belly.  It's a combination of vintage 1940's magazines with a bit of O mag thrown in.  It measures 9"x14" and could be yours if you want it.  Let me know and I'll shoot a price to you.  It's on gessoed mdf panel.  I will frame it in a black floater type frame.
Well, that's all for now.  I hope I haven't scared you with my 'anger'.  Tell you what, who would YOU rather be with?  Someone like me who isn't afraid to stand up for what's right and good?  Or someone who 'toes' the line and doesn't want to cause a ruckus?
Me,  I'm sticking up for myself and you, if you need it.
Posted by Unknown at 10/13/2011 No comments:

In A Little Red Barn On A Farm Down In Indiana 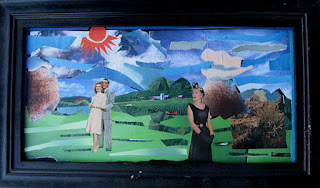 This is my latest mixed media collage.  I'm moving back into my home studio due to some major unhappiness with the way the management (or should I say, mis-management) of the artist organization I'm involved with. That's all I'll say about it right now.  For me, the making of art is important.  This quasi political brew ha ha is just a bump in the road.  Since the physical/emotional disruption, I've been unable to make art in my downtown studio.  Thus, I've been making collage work at home, like crazy.  I guess I should thank those who have had 'control' over my (and other artists) destiny these past months.  The anger I feel has pushed me onward and upward.  In other words,  thanks, now get out of my way.
This piece is based loosely on my memories of growing up in Northern Indiana.  There was (or maybe still is?) a major AM radio station, WOWO that had huge wattage.  It was an important source of information regarding pork bellies and such.  They had a program that started with a song;  "In a little red barn, on a farm, down in Indiana..."
And so, maybe that is the name of this piece, or maybe it's just "Down On The Farm".  I used a lot of vintage 1940's magazine images, plus some contemporary Oprah mag pages.  It's interesting, at 1st Thursday the other night, a friend looked at it and said, "Oh look, there's the Mother and Father...and their, uh"  I'm pretty sure it's more like 'High Drama On the Farm"...Honestly, I'm not really sure what any of this means.  My collage work is much more in the surreal vein, and more just what feels right together.  So, what it means is more up to the viewer.  I had no deep intentions, really.  I just like putting pieces on a board.
If you are interested, this piece is framed and available.  Let me know and we'll talk $$ and logistics of getting it to you.
Meanwhile, I continue to make scratchboard pieces, and teach and demonstrate the process of making art with scratchboards. I'm a happy girl from up there in farmland, living down here in southland.  And oh yeah,  have a great day out there!
Posted by Unknown at 10/11/2011 2 comments: 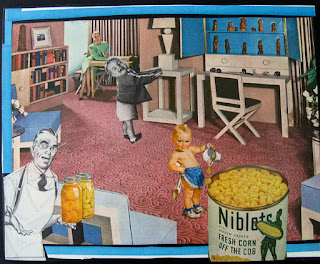 Just finished this 8"x10" mixed-media collage last night.  Dang, I have fun with these!  The images are from my collection of 1940's magazines.  Title is "Niblets".  It's framed in a black floater type frame and ready to sell. Mounted on gessoed 1/4" MDF.  Special online price for the next two weeks,  is $150.00.  Usual cost for an 8"x10 from my studio is $250.00 so that's 100 bucks off folks.  I'll be putting this up on etsy tomorrow, same price for two weeks.  Sale ends midnight Oct. 17th. So line up and sign up and buy now, save $$
I know, I know, you think, geez, this is just a bunch of scraps of paper glued together.  Yeah, well, I went through the magazines, picking out images, cut the boards, gessoed them, glued everything together and then put a nice uv protected finish on it and framed it. You know what I'm saying? This is bonafide work.,  I'm tired just talking about it now.
I hope y'all enjoy my fun cut paper activities.  Hey, have a day out there!
Posted by Unknown at 10/03/2011 No comments: